One of the interesting new features in the upcoming Swift 3.0 release is support for “keyword highlighting”. This allows users to setup Swift such that it’ll alert them to activity that matches their configured highlighting rules. This is particularly useful where a user wants to be alerted when particular discussion topics, or keywords, are mentioned in chatrooms (highlighting rules are configured independently for private chats and chatrooms) - e.g. a Swift developer might choose to have a highlight configured to alert them when the word “Swift” is mentioned in a chatroom they watch, or a military operator may be interested in keywords such as “MEDEVAC”. Highlights can either be configured to be visual (with foreground/background colour applicable per rule), or may be audible (either with the default sound, or user-provided sounds per-rule). 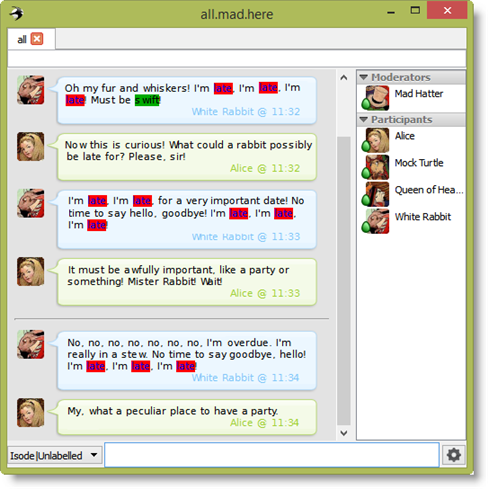 As well as per-keyword highlighting rules, messages from a particular user may be subject to highlighting, e.g. the following screenshot shows a highlight configured for the Queen of Hearts’s user (black on yellow). 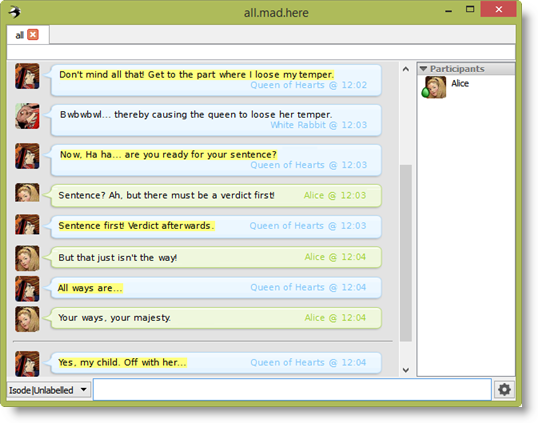 These features will be released with Swift 3.0, and can currently be configured by selecting “Edit Highlight Rules” from the general menu in Swift.

(This post describes a currently unreleased feature, so details may change slightly before release)

Hey There!
What is This?